OK so what is the score with all the hype surrounding transmedia planning?

A guy called Faris and Ivan from Naked presented their thoughts, inspired by by some stuff in Henry Jenkins' new book Convergence Culture, at the APG Battle of Big Thinking in London. Details here. It has generated some debate and fervant condemnation of media nuetral or 360 planning.

The basic premise of transmedia planning is that rather than using different media channels to communicate the same idea, you can use each channel to communicate different things. Everything is still tied together by the same brand strategy or narrative, but each channel does what it does best, rather than bending to fit an idea that's not really built with any particular channel in mind. Each channel is strong and self-contained enough to live on its own, but can then be pulled together into a greater brand narrative. Encouraing social relationships to help forge connections, forming a brand community that shares and builds on each others' experiences with the brand. I've seen the advertising, you've been to an event, she's tried the product, he's had a good experience with an employee, and we all compare notes. The much touted best practise example of the the A3 H3IST is a great case study but surely required multiple channel exposure for full impact, rather than each channel living in its own right.

Err isn't that 360 planning: a brand idea at the centre delivered across multiple channels. Each plays an important and complimentary part but each also exists in its own right. And wow" stimulating thought and conversation from your collective brand audience. Doves' campaign for real beauty is a better example of this. See the poster, a site or the youtube posting and each makes sense in its own right. 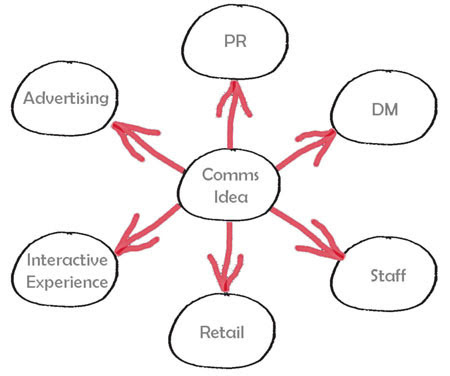 Transmedia planning surley a case of the emperors new clothes? For all those social bandwagon jumpers surely a better name would be Media 2.0. The 360 model aint broke just they way people have been deploying it.

That said there is some interesting thoughts on designing executions on mulitple layers. Each different layer or detail could appeal to a different group of people, who could compare stories, and thus continually be getting new perspectives on the same thing. Posted here

Nice one. All those examples the transmedia guys quote are great examples, but are equally great examples of true 360 planning. Enough with the buzzwords, people need to get on with the ideas...

What I found interesting is not that the media is/isn't planned from single or coordinated idea(s) -- whether they are or are not channel-driven and defined -- but that the concept of a signifying idea is replaced by social activity at a consumer level that itself knits together meaning (the signified) from a range of media moments. It raises questions for our customer journey process in which we try to plan linear and non-linear 'connections' in the customer experience when what is potentially interesting is signification that can happen in the 'lapses'. They may be the richest brand experiences but most elusive as they're not ones we plan, or even enable -- if we're lucky, we find them and build from them.

the space between comms, the discussions that our communications prompt are the really powerful influencers and always have been. I don't object to the approach of rethinking the role of our messaging from a finish point to a start point, ensuring we develop ideas that can be built on and adapted by our audiences, but the "transmedia" terminology and throwing out of 360 as an idea and approach when it still applies (oh, and we ((ogilvy)) have trademarked).

"Transmedia Planning", "360 Marketing"? Reminds me when "Integrated Marketing" was the buzz word two years ago. The idea isn't new; it's just another assault on the traditional marketing model that those with the budgets and most to risk clutch to with false security. Change will happen once the old model (i.e.: Ogilvy on Advertising) is officially declared dead. Until then keep up the good fight.

[Belatedly] I welcome the notion of TMP, and any thinking discourse around "comms planning" (or call it what you will). That said, I find a false opposition when Mr Oke asserts that one of the "weaknesses of media-neutral planning [is that it ignores] that different media are better at different things". I confess I thought that was the entire point of media-neutral comms planning. Ho hum.

Who knows where to download XRumer 5.0 Palladium?
Help, please. All recommend this program to effectively advertise on the Internet, this is the best program!

I think the channels should join, so sandals all the public could and would have more money coming.

this graphic explain in an excellent way the form to understand the trasmedia planning, it is wonderful,I love this kind of information, I can learn a lot !