THE FUTURE OF DIGITAL AGENCIES 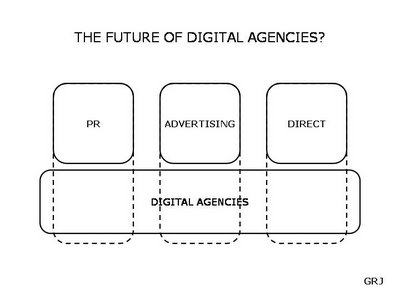 Daily Show: Person Of The Year

“it’s almost as if consumers have moved on because mainstream media has abdicated its responsibility”
No comments:

Finally someone using SL for something other than marketing hype.

IBM is launching an ambitious marketing campaign in the hip virtual world Second Life. Big Blue has developed 12 "virtual islands," and most will be open to anyone with a Second Life account starting next week. Other areas will remain private haunts for about 800 IBM employees —including the CEO— who have cyber alter-egos.

IBM's chief technologist, Dr. Irving Wladawsky-Berger, acknowledged that virtual-world business is the "experimental stage." Big Blue doesn't expect to generate a profit in Second Life soon. But the medium is promising —particularly for training and orientation sessions for IBM, which has 330,000 workers worldwide. Two in every five IBM employees work offsite part- or full-time, and it'd be vastly easier to host a virtual meeting than to assemble hundreds of salespeople or engineers in a physical conference room.

The company might even use Second Life for customer service. Instead of trying to explain in a phone call how to unscrew your hard drive, someone in a more immersive 3D world could actually show you.
1 comment: 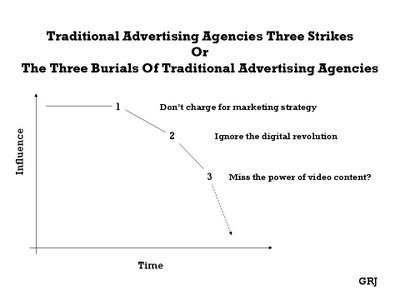 Death of a Salesman

Another story detailing the potential demise of the ad agency as we know it from the New York Times:

Marketers have been relying on consumers for ad ideas for decades, but only recently have users been asked to submit full-blown commercials.

The explosion of Web video and free hosting sites have made it possible for marketers like Chipotle, Converse, Frito-Lay, General Motors and MasterCard to hold user-generated advertising contests.

For instance, more than 1,000 entries have been submitted to the Frito-Lay division of PepsiCo in a “Crash the Super Bowl” contest to create a commercial for Doritos snack chips. The winning spot is scheduled to appear during Super Bowl XLI on Feb. 4.

Not only are advertisers wooing consumers into creating commercials, so too are the television networks that run them. The CW network is teaming with one advertiser, the Sunkist line of sodas sold by Cadbury Schweppes, to ask viewers of the series “One Tree Hill” to create video entries in a contest with an unusual grand prize: a role in an episode for the creator of the winning spot, filmed on location in the winner’s hometown.

The entrants are being asked to upload their video clips to a special Web site cwtv.com/sunkist. Consumers will be able to vote online for their favorite submissions.

Who Cares About The Consumer?

On Vincent Thome's blog Chris Wood at Tribal said “Brands shouldn’t care what is said on community sites any more than they should care about what is said in the pub”.

Yikes. I think this is flawed in two ways:

1. Brands should care what people say about them in the pub because that is actually, much more than a brand architecture or a peice of advertising collateral, the definition of your brand.

This is exactly what are communications are supposed to stimulate as discussed on a previous post.

2. Since when did the bloke down your pub have a voice that could be heard by millions of people.

Krytonite didn't listen to the man down the pub either.
2 comments: