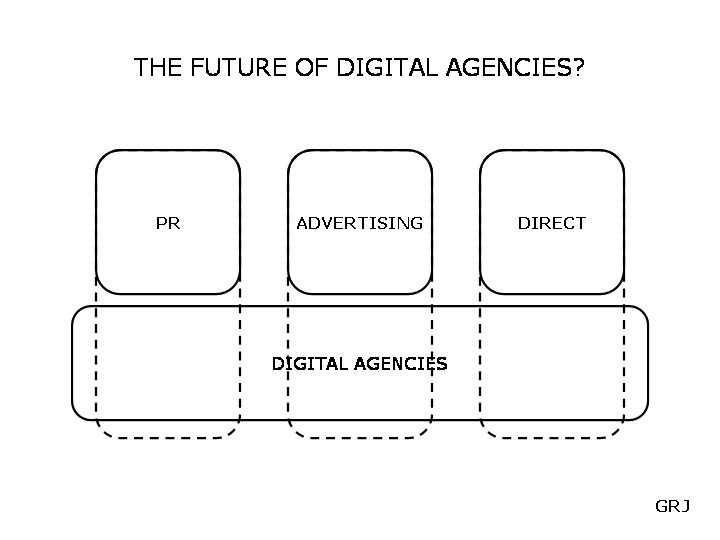 I am a Master student (and an ex-Ogilvy creative, but currently with Headstream) writing my dissertation just about this topic.

The aim of my research is to find out how an agency 2.0 is re-engineering its capability in order to ensure its ideas are relevant in this new social world. I’m interested in the skill-set mix and team structures. I’m also keen to understand if a common formula is emerging in much the same way it did with planning and art director /copywriter teams.

I have no doubt that you are very busy as a Global Digital Strategy Director. But please just let me know if you ever have half an hour after checking in at the airport. I‘d be pleased to come and meet you there for a short interview on the topic.

shoot me an email

We are in the process of making every thing in our business to go digital. With strong backup from AV PLANNERS we can reach new heights.

Great post!! Thanks for sharing such an wonderful information ...

I'm a college student and working on my homework about marketing stuffs and etc. Then I saw your blog which has the same graphs as what I'm doing with my homework. If possible, can you please explain to me what the graph means? Thanks!

essentially as traditional agencies do more digital they will take all digital agency business...more here http://interactivemarketingtrends.blogspot.com/2007/06/is-agency-roster-dead.html

I have learned a couple of things from your presentation. Nicely done!
Digital marketing is the promoting of brands using all forms of digital advertising channels to reach consumers. So go ahead and All the best.

We all know that digital marketing is very helpful for marketing businesses. Now, it has become easier because of the development of technology. With that, SMEs have an opportunity to compete with giant businesses. I'm one of the amateur entrepreneur. At first, I had a hard time thinking on what strategies should I use to call the attention of my target market. Through the help of my friends and other networks, I was able to find a good business strategy. I can say that internet is my best weapon, because I'm able to gain more clients. One of my friend told me that in Toronto, web development services is well known and he advised me to go there to find a professional Toronto web developer. He's right. My website have become the gateway between me and my customers.

What a blog I have read. Here you have great opportunity to learn in fabulous manner. Blogger has described everything in very effective manner so that you could get information what you want.